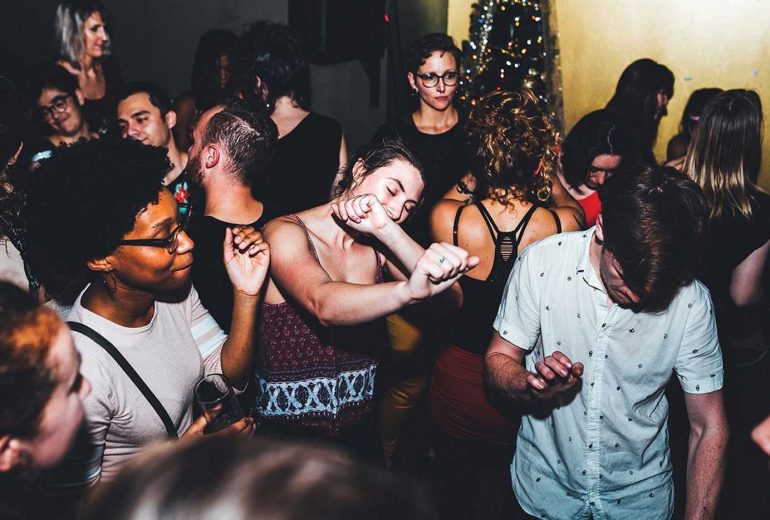 If you’ve ever seen someone standing in front of Viceroy in downtown Durham studying their maps app with a puzzled expression, they were probably trying to find Arcana, the bar hidden in an inconspicuous basement on the back side of West Main Street.

And if it happened to be the first Friday night of the month and they were dressed to move around, they were probably trying to find Super Secret Dance Party. An institution at Arcana from 2016 until the coronavirus pandemic, it turned a tarot-themed cocktail bar into an underground oasis for all the Durham nightlife hounds who prefer sweaty cellars and warehouses to spacious rooms with bottle service.

These days, though, it seems that all roads lead to The Fruit. Already the de facto home of The Floor’s house music parties and Maison Fauna’s UK garage grooves, the Dillard Street warehouse adds Super Secret, with its distinct purview—hip-hop and reggaeton, spiced with dashes of Indian or Greek music—to its roster on Saturday, July 24.

Though it’s still a basement party, that basement is three times the size of the one it grew up in. “Bigger” seems to be the theme of Super Secret’s first outing since the pandemic, where masks are welcome and encouraged but not required.

Instead of the classic duo of co-founders Rang Rajaram (DJ Rang) and Jordan Chavis (DJ Forge) trading off behind the decks, Chapel Hill’s DJ Nevy will open, and Raleigh’s DJ Sunny Sistuki will headline, with a closing set by Rang. There’s also an art installation and a live podcast. And instead of a monthly party, it’s an all-in one-off event, though Rang hopes to do it again.

Rang remembers when he first stumbled into Arcana in 2016, not long after it opened.

“It was in a back alley, and no one had good directions,” he says. “If you knew, you knew.”

He happened to know both owners, Lindsey Andrews and Erin Karcher, and they booked him for a DJ night. The day of the party, he was talking to Forge, who was feeling down after a bad night in Chapel Hill—“an annoying younger crowd, management telling him what to play, stuff like that,” Rang says. “So, I said, come play with me; it’s Durham, the dance crowd is always awesome. It was amazing, and Lindsey handed us a big stack of cash at the end of the night.”

Named in honor of its elusive home, Super Secret was born as a monthly party. On the technical level, the duo favored simplicity and immediacy, exploring the possibilities of two DJs with two turntables and a mixer. They had a vision of what they wanted to play but an unpretentious openness to wacky requests, as long as they were left on the Facebook page.

“I dubbed it sustainable nightlife,” Rang says, laughing. “It was a place where we could DJ however we wanted. The cover was reasonable, the set-up was easy, the sound system was small, the drinks were great. Even if another place had bigger crowds or an installed light system, the sense of community wasn’t really there. At a typical club, the dance party doesn’t kick off until midnight, but people here had this comfort level that they’d start dancing at ten o’clock.”

Though it’s hard to imagine Super Secret not being at Arcana, the split was amicable—it had outgrown the space, and everyone is trying new things after the shutdown. The same goes for the absence of Forge, who’s laying back from DJing to pursue other career goals.

But there’s much to be excited about in the new configuration.

The evening begins at 9:30 p.m. with the live debut of Justin Laidlaw’s podcast, The Buddy Ruski Show, featuring a panel discussion of all things Durham with the hip-hop artists Lord Fess and Jooselord Magnus and the executive director of Scalawag Magazine, Cierra Hinton. An adjacent chill-out room will feature projections of both an original video by Saleem Reshamwala (responsible for the visuals of another Rang production, DISHOOM) and a live painting by Michelle Durango Lopez, whose prints will also be on view. Tickets are $18 in advance via Eventbrite and $20 (card only) at the door.

“Though it’s not the largest of The Fruit’s many varied spaces, Rang chose the basement to make sure it still felt like Super Secret.

“It still has that dungeon vibe,” he says. “A smaller crowd in a smaller room, that energy is always better to me. You’re not on a DJ booth or stage overlooking everyone, you’re right there, eye-level, and can read people’s faces and body language.”

DJ Sunny: A Journey From Eldoret To Breaking The Internet In Diaspora America 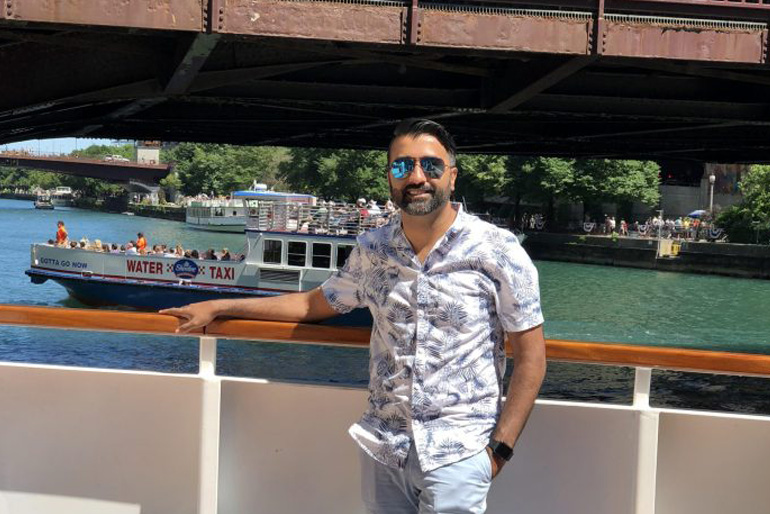 Two weeks ago while Sunny Chauhan checked out his Facebook account, a post by Frank Wesonga caught his eye. Frank and a group of 5 others had founded a Facebook Group called “ 254 Diaspora DJs Live on the Mix ” with the goal of entertaining Kenyans amidst the Covid-19. With people being asked to stay at home in an effort to curb the further spread of ... 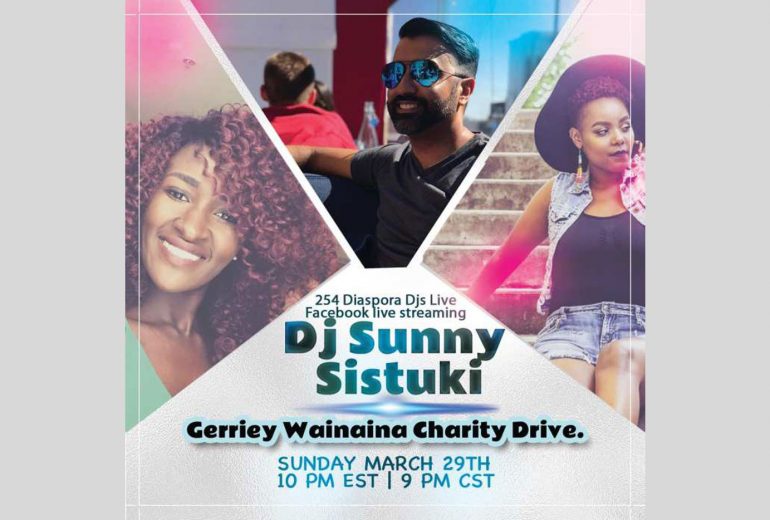 There is no doubt, Dj Sistuki is the runaway fan’s  favorite Dj at 254 Diaspora Djs Live on the Mix platform.  The hitherto unknown DJ has won rave reviews for his showmanship and a selection that samples a wide range of music and a such appealing to a wide and diverse fanbase.

Today, Dj Sistuki pulled another commendable gesture that will definitely win him more fans. The North Carolina based Dj has committed all tips raised during his set towards Gerriey Wainaina’s medical drive

Gerriey Wainaina who lives in Seattle, Washington was diagnosed with stage 5 renal kidney disease in 2018. He has been on the Washington transplant list since then, and which on average takes 5 years get a kidney. So far, he has had no success in getting a living donor.

Gerry undergoes peritoneal dialysis 4 times every day over the last two years. There was a funds drive in 2018 and the money raised then has been used in his treatment. There is however, a long way to go and more than ever, additional funds are needed.

The gesture by DJ Sistuki will go a long way to keeping Gerriey’s  hope alive. You can also pitch in and walk with Gerriey. A Go Fund Me has been set up where you can make your contribution.

The campaign was started by PROJECT Afya.in partnership with Kenyans in Diaspora. The goal is to help Gerry raise funds to meet his soaring medical bills as well as find a donor for Gerry so that he does not have to wait for years for a slot to open up in the state list.